Dec 12, 2021 This is a list of fixed issues in Service Pack 5 for Crystal Reports for Visual Studio 2010 (CRVS2010). Sap Crystal Reports For Visual Studio 2010 Runtime Download Overview. This wiki documents 26 issues that have been addressed in Service Pack 5 for CRVS2010. The issues are documented in individual KBases. Jan 07, 2011 I am eagerly waiting for the release of this great reporting tool for Visual Studio. Finally, you can download it now for free. One clickNo cost. No registration. If you want to download earlier version, click here. The size of Crystal Reports 2010 is only 278 MB. It also supports 64bit.

There are three distinct deployment scenarios for deploying Crystal Reports for Visual Studio 2010. The deployment options include the use of merge module (MSM) files, MSI file and ClickOnce. Only MSI and ClickOnce deployments are available in both 32 bit and 64 bit modes. The MSM files are 32 bit only and do not include Microsoft Visual C++ 2005 dependencies.

Licensing must be the first consideration in any runtime deployment; will this be a Windows application? Intranet application? Extranet application? Each of these has its own licensing intricacies. For more details see the SAP Crystal Reports Licensing Information page and / or consult your account manager or SAP Sales.

Crystal Reports for Visual Studio 2010 merge module (MSM file) is a single package that includes all CRVS2010 files, resources, registry entries, and basic setup logic. The MSM is smaller – about 42 MB as opposed to the 32 bit MSI (72 MB) and the 64 bit MSI at 80 MB. The Crystal Reports MSM file is configurable and thus allows for the removal of database DLLs not needed by the application. However, the MSM file is missing the Microsoft Visual C++ 2005 Service Pack 1 Redistributable Package ATL Security dependencies. It is the responsibility of the developer to ensure that the Microsoft dependencies are installed before attempting to install the CRVS2010 runtime. Missing Micosoft Visual C++ 2005 dependencies will typically lead to errors. An example error would be the following: 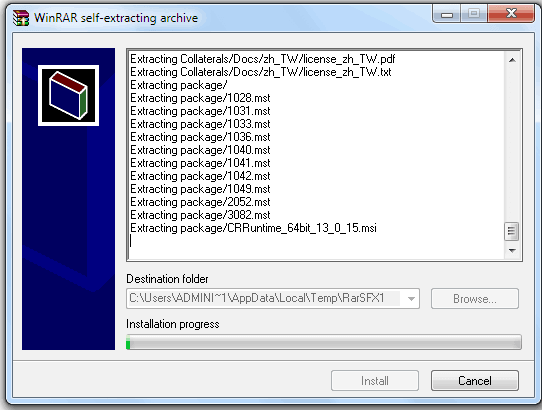 Note that the above error will be repeated for a number of different files.

See KB 1544708 for more details. Additionally using the merge modules effectively binds the CRVS2010 runtime to the application. Thus in the event that the application needs a CRVS2010 update, the application setup project will need to be re-packaged, uninstalled and reinstalled on the client system in order to update the client with the new runtime. A note that bears repeating; there is no 64 bit MSM file.

Extranet applications installed by the end user may require better user interface than that supplied by the default MSI and in this case chaining the MSI file into a setup project will be a required, leading to additional scripting. The default CRVS2010 MSI packages include all the required CRVS2010 files, “Microsoft Visual C++ 2005 Service Pack 1 Redistributable Package ATL Security” dependencies, registry information and more. Note that as in an MSM based setup project in the event that the application needs a CRVS2010 update, the application setup project will need to be re-packaged, uninstalled and reinstalled on the client system in order to update the client with the new runtime.

ClickOnce deployment used for Windows applications only, uses an MSI file (32 or 64 bit) hosted either by SAP, or the application developer. Ensuring that the correct files are automatically installed on 64 bit Operating Systems will require product XML modifications. See KB number 1553968 . Using ClickOnce deployment greatly simplifies the process of installing and updating an application’s runtime. Other advantages of ClickOnce deployements:

Some of the disadvantages of ClickOnce deployements: 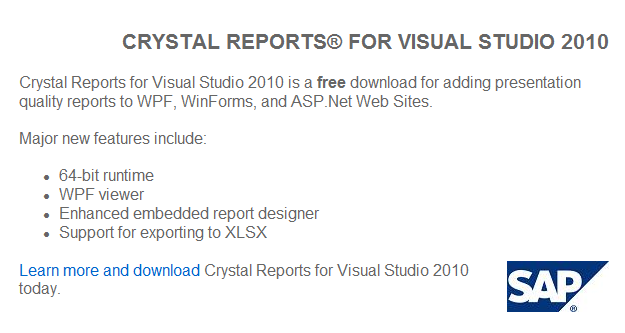 This wiki briefly introduces the topic of deploying the Crystal Reports for Visual Studio 2010 runtime. The following wikis detail the how-to of the three deployment options:

You will need to manually uninstall your existing CR for VS 2010 beta before installing.

We know the size of the runtimes is still too big. That is the #1 improvement planned for the production release in Q4 this year.

Now that we have beta-level runtimes, the deployment whitepaper that describes how to use the CR 2008 runtimes is no longer necessary. We recommend using the runtimes above for your solutions.

Please continue to use the Crystal Reports for Visual Studio 2010 Beta – read before posting for feedback and technical support questions.